This is a punk rock album about growing up.

“Stars” was our back-to-basics album, after a couple of more experimental releases in the early 2010s. Speaking for myself, at least, I wanted to recapture the uncomplicated punk energy of our early songs, but now with the (relative) emotional maturity of a 30-year-old brought to bear on the lyrics.

Zoey and I lost our grandfather during the writing of this record, and before that happened there were other areas of my life that had collapsed already. I was also quietly grappling, more than ever, with whatever beige, monolithic force it is that crushes the playfulness and exuberance out of a person as they grow older and are expected to act like an adult. There is a tension there, between the need to become the person others are depending on you to be and the need to be fully alive and have an outlet for joy.

This has always been one of our favorite records we’ve made, and my first quarantine project of 2020 was to re-mix and re-master it from scratch, to get the sound quality more in line with our newer work. I think it’s much closer now to the vision I originally had in my head while making it five years ago. To say nothing of the gorgeous new artwork, painted by our very own Jackie LeFevers.

This album is about anxiety and loss and growing into the person you want to be without losing the things that make life interesting along the way.

This album was the first one in our history where we succeeded in making a video for every single song. Click below to start the playlist.

Or view the album’s liner notes booklet as a gallery: 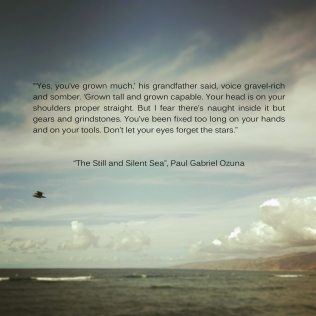 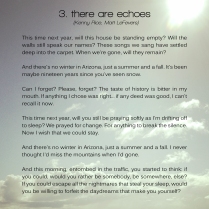 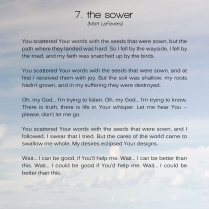 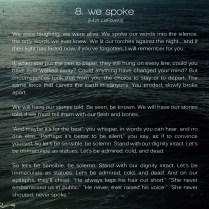 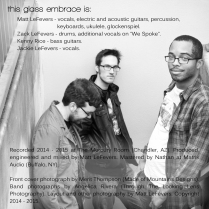 “Immediately, the album starts with a sense of familiarity as we are reminded of the sounds of mid-2000’s pop punk. The band shines best through their succinct instrumentals, and it is very obvious that this group has been playing together for a long time. Each riff and lead line weave in and out of the other instruments. […] While it may not be for everybody, there are certainly great things happening within the sonic structure created by This Glass Embrace. They certainly know how to compliment each other’s playing style and they build upon simple and familiar sounds to make something of their own.”

“[This Glass Embrace] plays a distinct mixture of indie rock and post-hardcore on most of their records, although the noisier and rougher post-hardcore parts have been kept to a minimum on “Don’t Let Your Eyes Forget The Stars”. The plethora of different instruments that spiced up a folkier sound on their previous record has been left out here to go for a simpler sound that puts the lyrics and melodies very much in focus. […] That does not, however, mean that the sound or creativity in songwriting in general suffers, as is evident from the very first atmospheric, echoing moments of the “Intro” track that opens the album…”