There’s no such thing as chance.

The A Picture So Clear EP was the first music release I ever played on that I was actually proud of. It was the first that came together perfectly. It felt comfortable. It felt right. It felt, to me, like we had been playing together forever. It symbolized a new beginning in many ways. It is an EP that has beautifully changed many aspects of my life, from the music I was creating to the people I would call my family. It inspires me to be better than I am, to create better than I have.

I first met Matt (and by extension, Jackie, and later Zack) on December 9, 2005. My old band was playing a show and I had found Matt’s music on MySpace (we’re old) and asked Matt to open the show. I instantly connected with Matt and the Nodding Dog crew. Matt and I kept in contact and bonded over our insanely similar tastes in music. Flirting with the idea of turning his solo project into a full band, Matt enlisted myself and Zack, and This Glass Embrace was born. I was already a fan of the music Matt was creating, so I jumped at the chance to create music with two men who would become my brothers.

I remember being so very proud of the EP we recorded. Still being a senior in high school at the time, I would tell anyone and everyone about it. I’d listen to it all the time, something I’ve done with everything we’ve released since. I am the biggest fan of everything we do and I am honored to be a part of it. It’s wild to me that our band that was born while I was still in high school has been steadily releasing music for a decade now. Each release has been different from the last, but each has been distinctly This Glass Embrace.

This Glass Embrace is my family, my muse, my outlet, and my escape. I am in love with this band. I cannot fathom what my life would be without this amazing force in it. This was always meant to be.

Or view the album’s liner notes booklet as a gallery: 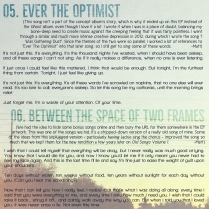 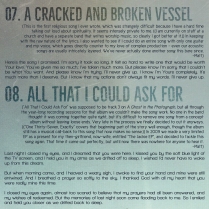 A compilation video we made out of live footage,
to celebrate the 10th anniversary of this EP.